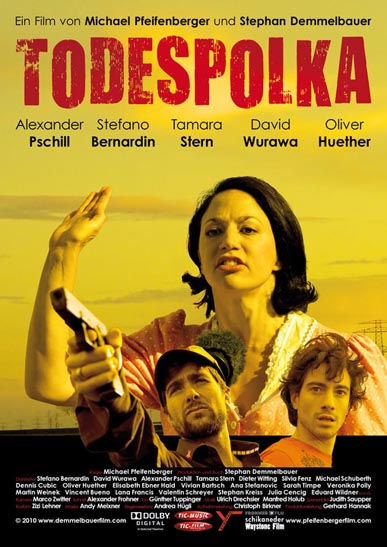 Comments of the producer and author

Austria’s political culture has undergone an unparalleled decline since 1986.

Demagogic, xenophobic slogans are now socially acceptable (“At home, not Islam,” the demand for “Western lands in Christian hands”), and compared to his imitators, Jörg Haider has come to represent a relatively moderate political style, and not only since his demise.

My intention was to take this coarsening to its logical conclusion. Political rhetoric has always had long-term effects, including on peoples’ daily lives. What politicians say to fire up the crowds at election rallies can ultimately lead to outbreaks of violence.

Making all the radical possibilities this can entail comprehensible, to a broad audience also, was the intention behind the “Todespolka” project.

The film develops in a linear and slow, typically Austrian fashion, and the stylistic elements employed are intentionally simplistic. The majority of the monologues and dialogues were taken, with few alterations, from discussions at bars, political rallies and letters to the editor of the country’s leading tabloid. No effort was made to package this material subtly, because the film was not intended for film experts alone.
Tension is created precisely because the viewer knows subconsciously how everything will turn out, but doesn’t want it to happen.

The film’s relevance for all other European countries was shown recently by big wins of ther right wing partys in the last elections.